Pattern Spares for your Range

We specialise in obsolete and second hand parts for Aga Range Cookers and Rayburn Range Cookers. Many of these parts are now unobtainable from the original makers as these models are long since discontinued. As a result we supply mainly after-market parts but also some factory original parts.

Aga Range Cooker Definitions - Help identifying the model you own

The aim of this page is to help you identify your Aga so that you can order your parts with confidence. PLEASE study this carefully – if you order incorrectly don’t blame us! Each model on this page has a picture number. If you need to contact us after identifying your model please state the picture number in any correspondence.

So called as it cost £47/10 shillings - that's £47.50 nowdays when sold. This model was made before 1941 and we cannot supply ANY parts for it at all. Yes some are still working but really 80 years later I wouldn't suggest buying or working on one! Its distinguished from its younger relatives by the "funny shaped" ash pit door, often a cranked cast iron chimney (called an elephants foot) and the big grill in the door. Only made to burn smokeless fuel
a 4 oven version was made - called the "82" I will leave you to guess why!

Once again DO NOT BUY! Insufficient numbers left after nearly 80 years make this an uneconomical model to make parts for. 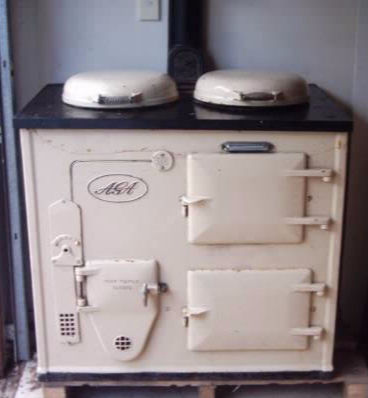 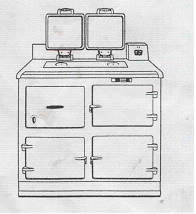 The Agathermic. This smaller version than the usual Standard or Deluxe was made from 1958 and dropped around 1972 when Aga bought out Rayburn. It was too similar to the Rayburn Royal so would have diluted sales. No parts are available and we don't recommend installing. Oil and solid fuel version were made.

DO NOT BUY – NO NEW SPARES AVAILABLE

Easily defined by its SQUARE LIDS.
Small size – modern Agas are all over 26” deep and more than 38” wide

Made 1941- 1972 Model C, CB (cooker boiler) and 4 oven model E.
The Aga Standard. So called as the foundries around the world "standardised" the cooker into one model making manufacturing simpler. Made from 1941 to 1973 ONLY to burn smokeless fuel. Any other fuel used means the cooker has had a conversion - not made by Aga - so "unapproved". These models - made as a 4 oven as well - have a loyal following and we can supply every part EXCEPT the mercury thermostat - illegal now. Also after market oil and gas conversions are still made NEW with approvals.

It's defined by:
Simmer plate is bigger than the boiling plate -with no cast ring around it,only a cord to fill the gap
The AGA name is embossed into the front. The black top is flat. The domes were CREAM cast iron on 2 oven models, Chrome on 4 oven versions,
The ash pit door has "keep tightly closed" embossed on it - and a lift off grill below conceals the secondary air inlet tube hole.
The flue box is shiny black enamel

Picture 3
This 2 Oven model has had an oil conversion as evidenced by the pipe entering the burner area through the ash pit door.

We are able to supply most conversion kits. Please contact us for details. 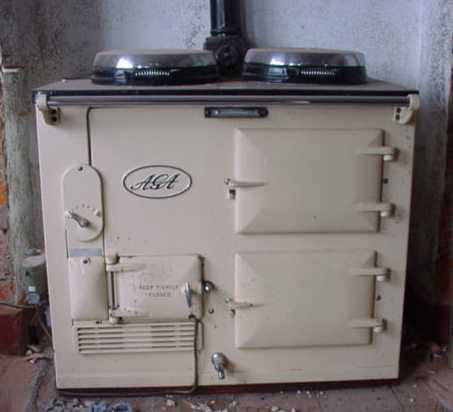 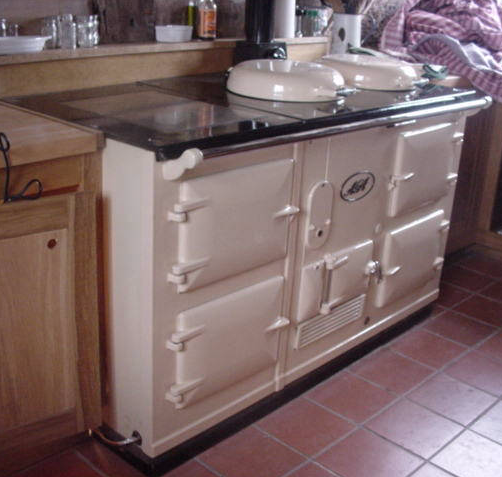 Picture 4
The 4 oven could have CHROME or CAST lids

Aga Deluxe Pre 1974. This cooker was made from about 1953-1973 and was called the Deluxe. Performance was identical to the Standard but cosmetic changes made it a "new" model. It was initially sold only for smokeless fuel but oil and gas versions were introduced in 1960/70s. Coloured enamel front cream, white, sky blue – later brown, black, red, dark blue, green

The differences that define it, compared to the Standard are:
Three (or 5 doors) on the front are a similar size. If solid fuel, it has an inner door behind the outer leading to the ash pit area.
Chrome domes on all models. A raised shelf about 6" wide is all along the top, behind the domes.
Both hot plates have an expansion ring around them.
The AGA name plate is a badge - not embossed into the cast iron front.
The cast iron flue box is covered by a "shroud" which can be lifted off. Gas versions have a gas diffuser.
The thermometer is tight up under the black top with no enamelled front above it. 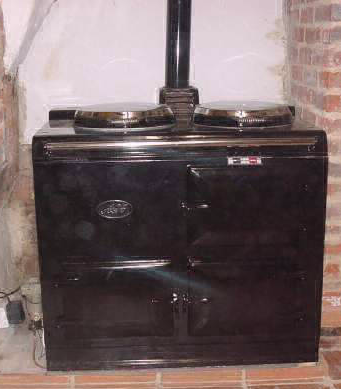 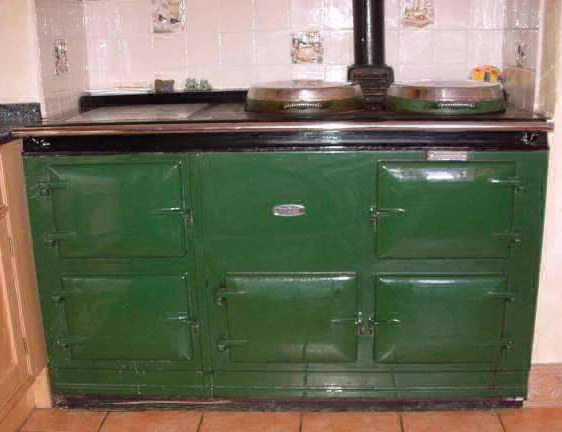 Slightly different to earlier version of the Deluxe you can tell the age by:
The black top has a small upstand across the back approx 2" high but less than 1" wide - not a shelf you can put small pans on.
The thermometer has a clear 1" gap above it showing the enamelled front plate.
The chrome domes have smaller hinges and have lower chrome section than the earlier model.

Oil, Gas and Solid fuel in 2 or 4 oven versions. Optional bolt on badges.
Colours – all of earlier ones plus pewter, claret, pink, British Racing Green, 3 blues, etc.
The 4 oven version has separate section, with own towel rail and joint strip between sections. 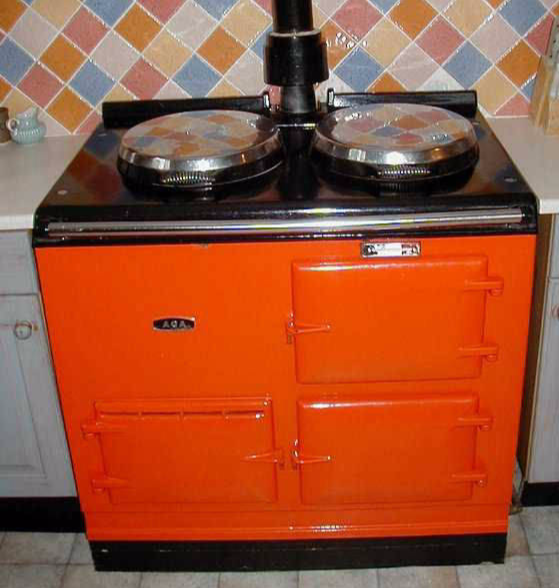 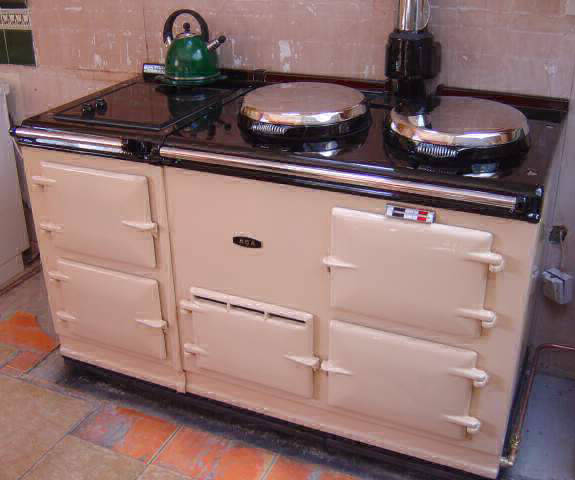 These were nearly always made for oil or gas but later electric. The post 95 models differ by having spring assisted domes that make lifting and lowering less difficult. Otherwise they appear identical to the post 74 models

Please note there are no spares available for the Aga Patent. 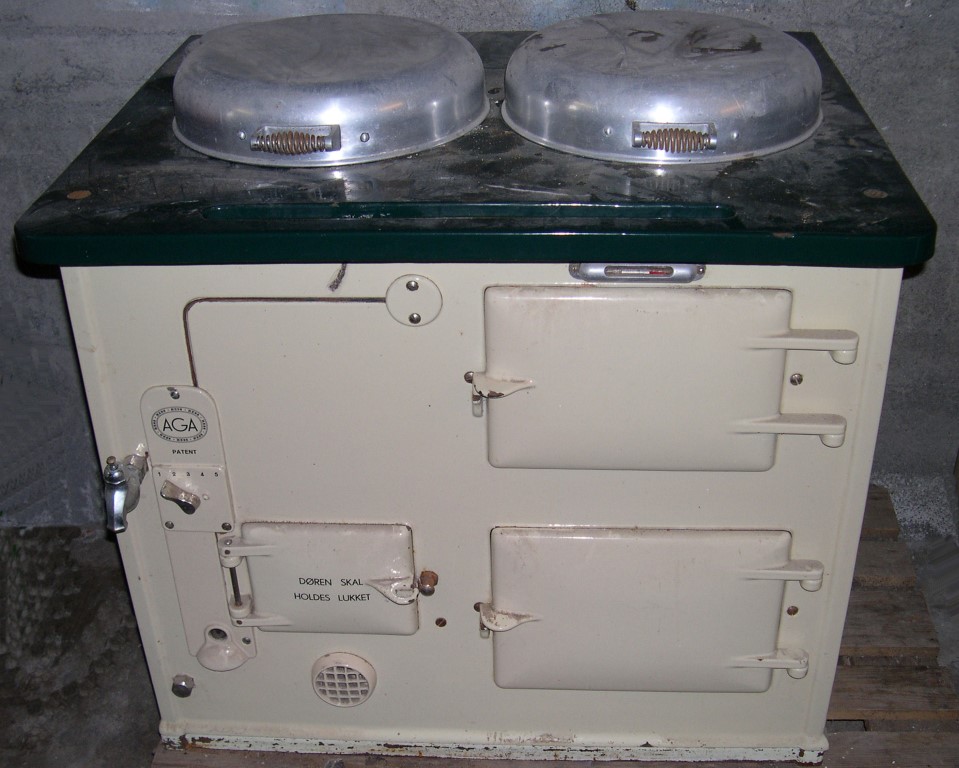 GET IN TOUCH WITH US AND WE CAN HELP YOU